The connection between the student’s ability to learn and their physical activity has been known for decades. But the implementation of the practice of physical activity during learning has not been consistently practised. The use of games in your team building program can add the physical activity that according to these reports will improve the learning that will occur.

There are many articles in this area but I am confining my references to three of the latest reports. They are all from the U.S.A. and have been published in the last three years. The most recent report was published in May of this year by the Institute of Medicine of the National Academies.

Children who are more active show greater attention, have faster cognitive processing speed, and perform better on standardized academic tests than children who are less active… [They went on to add] In addition, students should engage in vigorous or moderate-intensity physical activity throughout the school day, such as through recess and classroom time dedicated to physical activity.

When learners are asked to stay sedentary for long periods of time they lose focus and and find it hard to concentrate. They may even become bored. But with a short break for some physical activity, they become energised and more attentive.

The next report is from the U.S. Centres for Disease Control and Prevention and was published in 2010. The authors studied 43 research articles and reports and made summaries of the findings. The most relevant quote in the Executive Summary for us with respect to movement and learning is:

When using games in team building programs, they are generally 5-20 minutes in length. Thus, they should have a similar impact with corresponding learning improvements.

Recess is slightly longer than games that you might use in a team building program but the concept bears comparison.

Based on the results quotes from these reports, inclusion of movement in your training programs will improve the participants’ ability to learn your program. 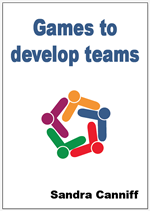